Whether you’re a keen gardener or just want a tidy patio ready for a BBQ with friends, weeds have a knack of making your outdoor space look messy very quickly. However how to best get rid of them is a contentious subject.

I have always been attracted to chemical spray on weed killers, after all, they are everywhere; on TV, in supermarkets and garden centres. In the modern world however, there are more factors than convenience. With two dogs at home, I can’t go spraying harmful chemicals in the back garden on the patio where they are likely to pick it up on their paws and lick it off after. I dislike trips to the vets as much as they do. So what’s the alternative?

I found myself looking into organic weed killers a while back and settled on a small flame weed killer. These so called ‘weed wands’ run off a small gas canister and burn / destroy the weeds. For a while this was great. It satisfied the pyromaniac in me and felt oddly satisfying watching the weeds suffer as they slowly went up in flames. However as satisfying as it is, as you burn through the gas canisters and keep paying out for more, you do have to ask yourself if there is a better way. It turns out there is.

Let me introduce you to the Batavia Maxx Heat. An electric weed killer. Working on a similar basis, this is a heat gun rather than open flame. In fact this IS a heat gun. It is sold as a 3-in-1 unit so can also be used as paint stripper and BBQ lighter, and it comes with the relevant attachments making it even better value for money. I picked mine up for £48 from Mower Magic (Jan 2017).

This electric weed killer uses a 600°C hot air stream to wilt the weeds. It turns out you don’t have to wait for the weeds to catch on fire (and with this they won’t, which is probably good for wooden sheds across the country). 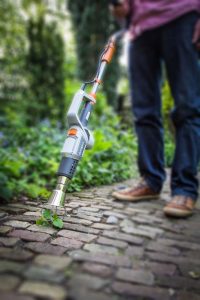 When you blast the weeds with superhot air, the heat boils the liquid in the plants cells. As this happens the cell walls split and the cells burst (not that you can see this happening). Once the plants ability to photosynthesise light into energy it can no longer survive. Within a week or so the plant has completely withered and died. All you need to do now is let them compost into your border, or sweep you patio to remove the debris.

This unit is small, compact and light, making it both easy to use and store. Despite its small size, the handle gives enough reach that even at 6’3″ It was comfortable enough to use for longer periods (although an extra couple of inches wouldn’t have been missed).

It’s not all perfect though. I did find the mains cable on this to be a bit short so needed a decent length extension cable to get around the garden. It’s not like a mower which normally has plenty of cord for most the garden. With this your extension lead gives you the length, the cord on the weed killer is really enough to get you around a border.

In a nutshell, yes, very well. Weeds wilted and within a few days had completely died. Generally the same weeds didn’t regrow, however I did notice some weeds appearing after another few weeks. I suspect this is because you’re not treating the soil with chemicals so it doesn’t stop new weeds germinating.

It took a while to first clear an area and get it under control, but its a bit like strimming, if you build this in as a quick job after you’ve mown your lawn, it keeps on top of them and becomes a simpler quick little job.

Overall this is a keeper. It’s cheaper to run and safer to use than the naked flame weed wands, I know within seconds of use the ground is safe for the dogs, and it’s nice knowing I’m using an organic solution. The 2 other uses are just a bonus if I ever need them.